MongoDB setup on your local dev environment is rather easy task. Basically you download MongoDB, install it and configure mongod (database process) to run as a Windows Service. All connection strings are already by default in your Sitecore ConnectionStrings.config file. That’s easy. But how to deal with it on production environment, when things are more complicated, cause you have to ensure required level of availability. In other words you need to be sure that your Sitecore solution will still work, even if some of its component, hosting MongoDB fails.

The easiest way to provide such setup is using MongoDB replication. How does it work?

You start with MongoDB installation on more machines: at least on two (or rather three, if you use arbiter) and configure replica set. In this set you have separate mongod process running on each machine, connected with each other. Every node in the set has its own role: 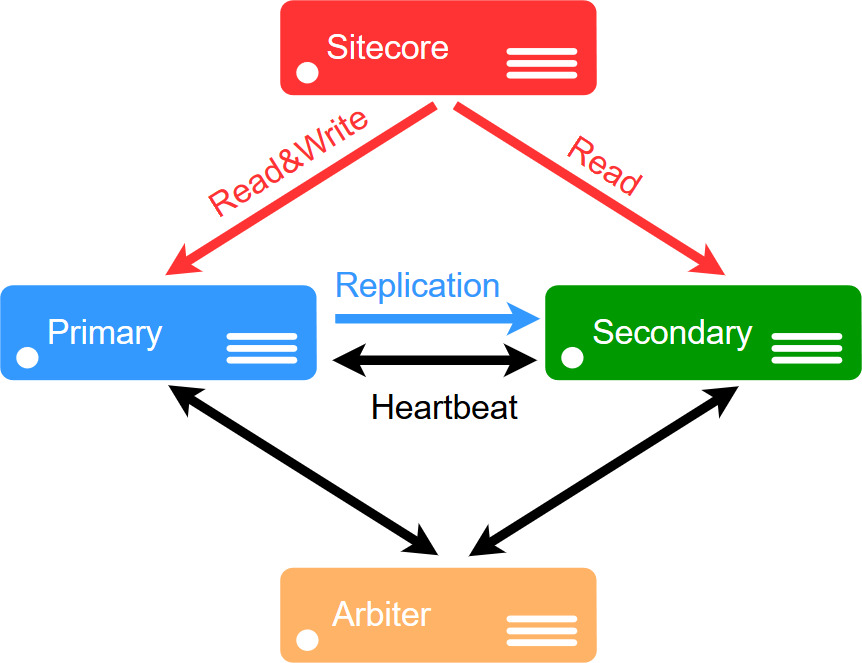 We need to install & run MongoDB on all machines and check if all nodes are able to talk with each other. We can use telnet or try to connect to MongoDB instance using mongo shell command from your MongoDB installation folder:

Repeat this step on all machines and try to connect to all instances.
Output should be “connecting to: mongo2.smartsitecore.com:27017/test”

First we need to change mongod configuration file on Primary by adding following lines (if you don’t use YAML syntax, just add replSet=rs0). rs0 will be the name of our set:

We need to change mongod configuration file on Secondary by adding same lines as on Primary:

Restart mongod on Secondary node. Then on the Primary node run rs.add() command from mongo shell

Change mongod configuration file on Arbiter, by adding the same replication set name and disable journal for storage (for non YAML syntax use journal.enabled=false). You can safely disable journal, cause Arbiter will not store any data, besides the configuration.

Restart mongod on Arbiter node. Then on the Primary node run rs.addArb() command from mongo shell

We need again run mongo shell command on one of the instances and call replication status command:

the output should look like below. We have three nodes in the set and all are operating:

We can now turn of mongod on Primary or Secondary data storage and observe what happens to replicate set using rs.status(). If Primary is down, Arbiter will automatically promote Secondary to become Primary.

Finally we can update default Sitecore connection strings to point to replica set: